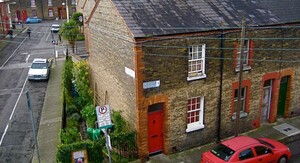 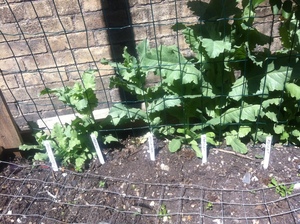 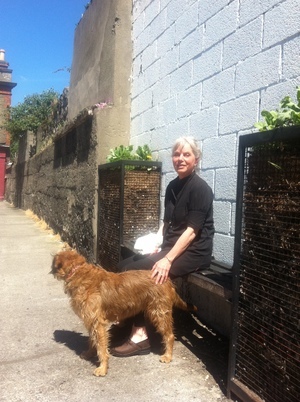 It’s an urban community garden whatsit at the end of a terrace on the corner of Sitric Road and Viking Place in Stoneybatter, Dublin.

Anne Hayden, who has created a new blog On The Batter, about all things Stoneybatter, Dublin, writes:

“New York native Kaethe Burt-O’Dea, (above) who has been living in Stoneybatter for 25 years, started the garden in 2005.

She explains: “I’d always composted and when I came to Dublin I was trying to compost in my back garden but we’re so confined here, we have so little space, that it wasn’t terribly successful.

It was really with a couple of neighbours that we started talking about composting on the street and looking at that site. In fact we didn’t know who it was owned by…and we still don’t.”

““We spent a couple of years worrying what would people say if we put something there, would they kick us off? And finally we said ‘what the hell’ and put some compost bins there and started composting and growing things there.”

On The Batter (Compost Together)

Meanwhile, In The Batter

‘Williamsburg By The Liffey’