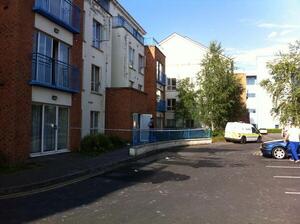 The fire broke out at the Thornfield Square Apartments, Watery Lane, Clondalkin (above) shortly after 5am.

Up to ten units of the fire brigade and ambulance services attended the scene.

There are no reports of serious injuries.

The apartment block is being treated as a crime scene and gardaí believe the fire was started maliciously.

Dublin apartment fire may have been started maliciously (RTE)

Meanwhile, On The M50