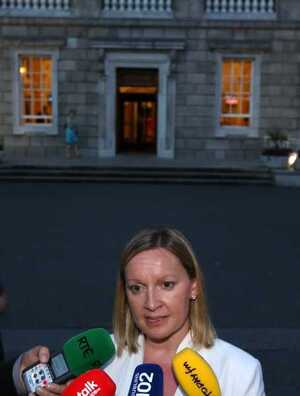 “I am deeply disappointed to have to vote against the Government’s abortion Bill today. I never wished or expected to be expelled from the Fine Gael parliamentary party. This is the party I have worked for unstintingly since I was 18 years old. I will, of course, continue to be a Fine Gael member.

I feel deeply and strongly that aspects of this Bill are based on flawed logic and absolutely zero medical evidence. I could not vote for it, particularly in light of Fine Gael’s clear commitment not to introduce abortion prior to the last election. Promises matter in politics, but particularly in relation to matters of life and death. This is a promise I could not renege on in any circumstances.

I believe that I have made the correct decision.

I have been honoured to serve as Ireland’s Minister for European Affairs for two years and four months and am grateful to Taoiseach Enda Kenny for his cooperation and goodwill throughout this period. As a Minister of State in the Department of an Taoiseach, we have worked closely and very fruitfully together. I believe that together, particularly during the six months of Ireland’s Presidency of the Council of the EU, we have achieved much in restoring Ireland’s reputation on the European and world stages.

I wish the Taoiseach and the entire Government the very best in continuing with the difficult work of restoring economic sovereignty to Ireland. I will work hard, as a member of the 31st Dáil, to compliment that work through my ongoing and enthusiastic contribution to our Parliament.”

Some say she was a TART. She campaigned to retain the threat of suicide in the 2002 campaign.

A Reform Too Far