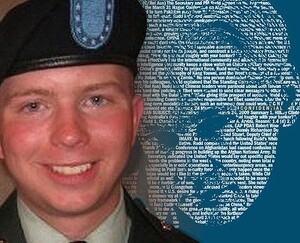 “Today Bradley Manning, a whistleblower, was convicted by a military court at Fort Meade of 19 offences for supplying the press with information, including five counts of ’espionage’. He now faces a maximum sentence of 136 years.

The ’aiding the enemy’ charge has fallen away. It was only included, it seems, to make calling journalism ’espionage’ seem reasonable. It is not.

This is the first ever espionage conviction against a whistleblower. It is a dangerous precedent and an example of national security extremism. It is a short sighted judgment that can not be tolerated and must be reversed. It can never be that conveying true information to the public is ’espionage’.

President Obama has initiated more espionage proceedings against whistleblowers and publishers than all previous presidents combined.

In 2008 presidential candidate Barack Obama ran on a platform that praised whistleblowing as an act of courage and patriotism. That platform has been comprehensively betrayed. His campaign document described whistleblowers as watchdogs when government abuses its authority. It was removed from the internet last week.

Throughout the proceedings there has been a conspicuous absence: the absence of any victim. The prosecution did not present evidence that – or even claim that – a single person came to harm as a result of Bradley Manning’s disclosures. The government never claimed Mr. Manning was working for a foreign power.

The only ’victim’ was the US government’s wounded pride, but the abuse of this fine young man was never the way to restore it. Rather, the abuse of Bradley Manning has left the world with a sense of disgust at how low the Obama administration has fallen. It is not a sign of strength, but of weakness.

The judge has allowed the prosecution to substantially alter the charges after both the defense and the prosecution had rested their cases, permitted the prosecution 141 witnesses and extensive secret testimony. The government kept Bradley Manning in a cage, stripped him naked and isolated him in order to crack him, an act formally condemned by the United Nations Special Rapporteur for torture. This was never a fair trial.

The Obama administration has been chipping away democratic freedoms in the United States. With today’s verdict, Obama has hacked off much more. The administration is intent on deterring and silencing whistleblowers, intent on weakening freedom of the press.

The US first amendment states that ‘Congress shall make no law… abridging the freedom of speech, or of the press’. What part of ’no’ does Barack Obama fail to comprehend?