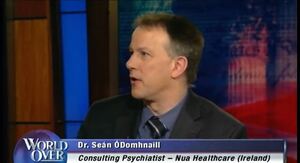 Arroyo: “What was the reaction to the march last week? You didn’t tell us. Edna Kenny is now saying what..Enda. I keep saying Edna like Dame Edna. Edna Kenny says what?”

O’Domhnaill: “He has this, he has this serious worry because with a turnout like that all of a sudden it sends a shiver through the government, the main party in government em Fine Gael. And an awful lot of their TDs, which would be like their senators, congressmen whatever, they’re turning around and saying hang on you know..”

Arroyo: “Maybe we should shelve this baby..?”

O’Domhnaill: “This is something which should be kicked down the road a bit. There’s a serious risk in the marginal constituencies we could take a serious beating because the the the people who went to the rally and all the people out there beyond who are on LinkedIn, facebook and all that kind of stuff, they’re all signing a pledge. The pro-life pledge is they will not vote ever for anyone who votes for legislation to legalise abortion, right. So you’re talking about you know say in, if you look at the 30,000. That probably represents about 600,000 votes, right. That is an enormous, an enormous power surge em and if you take it away from one party, they’re finished you know. And they know it. So he’s hoping just to keep his party together.”

Earlier: Issues Of Life And Death 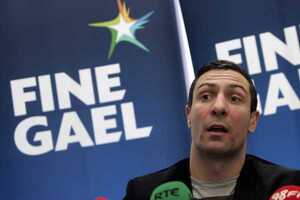