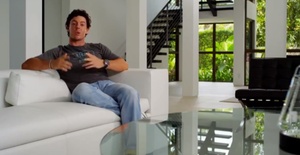 I feel like he has always been so open and honest about who he is and what he’s trying to do and he has been a bit skewered for it this year, which is unfortunate because that means he probably will close up a bit in the future.
For now at least though, he’s still open. And he has opened his home for us to take a peek. I thought the most honest moment was when he was in the trophy room (which is awesome) and talking about how he has to remind himself how good he is sometimes.