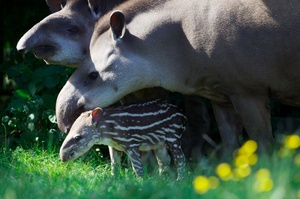 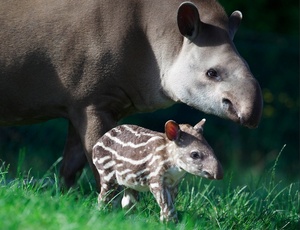 (Adult tapirs Marmaduke and Rio with their new calf at Dublin Zoo on July 1 and , above, Rio with her charge)

The Irish Examiner understands the incident took place after zoo keepers agreed to allow the family to view the tapirs from a closer site than most visitors — a step that is usually closely monitored by expert workers.

However, after entering the second site it is understood one of the zoo’s two adult tapirs — a female called Rio, whose weeks-old baby was also in the location — became agitated. An attack followed, resulting in the child suffering serious injuries after being mauled by the animal.