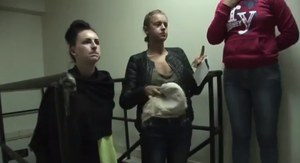 Michaella Connolly and Melissa Reid claim they were threatened at gunpoint by a ruthless gangster called ‘The Cockney’ to smuggle cocaine out of Peru to Spain.

“They knew everything about us – who our parents were, what they did, their phone numbers, what friends we had. They even had photos of them and threatened to harm them if we didn’t do as they ordered.” They claimed they had loaded guns put to their heads after being handed over to a ruthless South American cartel and warned: “Do it – or die.”

Peru drug arrests: We were forced to smuggle cocaine with loaded guns to heads (Mirror)