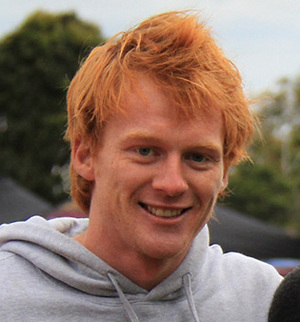 Tristan Thomas, who lived with his mother’s family in Mayfield, Cork for a number of years growing up, took the Australian team from 6th to 2nd in the final leg of the 4x400m relay heats at the World Championships in Moscow yesterday.

Tristan’s mother Mairead is from Kilkenny.

Cork runner and race director of the Charleville International Half-Marathon, Michael Herlihy, who was housemates with Tristan when they both attended the Australian Institute of Sport in 2005, sez:

“He told me how he used to get mocked for his Irish accent when he went back to Australia. Back then I used to joke that I would get Tristan to run for Ireland as he only had an Irish Passport due to the fact he hadn’t travelled out of the country since he was a kid.”

“It was disappointing that there wasn’t any Irish mens 4x400m relay team considering they beat a number of teams that were in the semi-finals of the worlds when they competed against them in the European Cup earlier in the year. So on Sunday at least there will be one man with Irish heritage in the relay finals Irish people can watch out for and cheer on to a possible medal.”