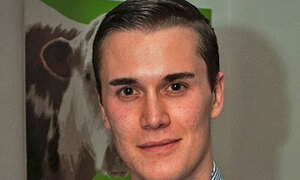 “Three all-nighters in a row, eight all-nighters: if someone’s in single digits for all-nighters, they’re one of the lucky ones… It’s a glamorous, high octane facade but when you’re working it’s 12 weeks of 24 hrs. Six and a half days is standard. You will go in at the weekend, you might get a Sunday afternoon off.”

An intern describes the working condition which apparently led to the suicide of Merrill Lynch intern Moritz Erhardt, above.

A sickening tragedy that will have particular resonance here in Ireland given our own sorry record. The obscene hours that young people are made to work, particularly in the banking, legal and medical sectors, are not only in complete disregard of their health, but also of their human rights, legislation and the company’s own business objectives.
How on Earth is someone – be they a banker, lawyer or doctor – supposed to be able to work to any kind of decent standard on the back of ‘eight all-nighters’? To say nothing of the conditions – no natural light, no fresh air, generally poor diet… This poor guy’s death is not the first in such circumstances – not the first casualty of this wretched culture of greed and inhumanity.