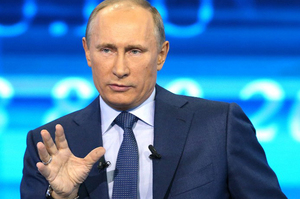 No one doubts that poison gas was used in Syria. But there is every reason to believe it was used not by the Syrian Army, but by opposition forces, to provoke intervention by their powerful foreign patrons, who would be siding with the fundamentalists. Reports that militants are preparing another attack — this time against Israel — cannot be ignored.

It is alarming that military intervention in internal conflicts in foreign countries has become commonplace for the United States. Is it in America’s long-term interest? I doubt it. Millions around the world increasingly see America not as a model of democracy but as relying solely on brute force, cobbling coalitions together under the slogan “you’re either with us or against us.”

But force has proved ineffective and pointless. Afghanistan is reeling, and no one can say what will happen after international forces withdraw. Libya is divided into tribes and clans. In Iraq the civil war continues, with dozens killed each day. In the United States, many draw an analogy between Iraq and Syria, and ask why their government would want to repeat recent mistakes.