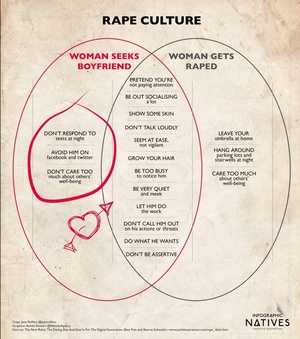 Remember that “how not to get raped” meme that was going around earlier this year? The one that painted rape as something that only happens in dimly lit car parks, carried out by armed strangers? That suggested rape has nothing to do with rapists’ actions, but with victim behaviour? That despite the statistical realities that demonstrate it is the least common type of sexual assault, this is the type of rape we should focus on?

That meme came back earlier this year, right around the time the ‘The New Rules: The Dating Dos and Don’ts for The Digital Generation arrived to tell us how we women are not only dating wrong, we don’t even know how to use the internet properly. You know, The Rules.

The ones that invite us to drive men wild with desire by ignoring them completely instead of giving into our impulses to be nice because we like them, or have sex with them because we want to. The rules that tell us to have long, ladylike hair that they can dream of pulling as they ride us like a horsey, to wear a three-inch thick crust of makeup that conceals our face-skin, and to dress sexy, sexy, sexy so they can see the skin everywhere else. The rules that tell us not to talk too much because there is not much we can say that a man didn’t know first. The ones that try to convince us that there is nothing that woos a fellow like a walking, not-talking, f*ckable doll. And apparently, we want to meet the guys that think like this, instead of the ones we actually date.

I noticed that these rules are almost the exact inverse of the “how not to be raped by a masked stranger”. That meme told us that things that increase your chances of being surprise sexed on the bonnet of a Honda include: having long hair, wearing sexy clothes, being quiet, wearing too much makeup, and leaving your umbrella at home.

So I “drew” a Venn diagram to show what I meant. Which is that the advice we’re getting about how to attract men (which is bullshit anyway) is the exact same shit that we’re told not to do if we don’t want to get raped. We really, really, absolutely — in the eyes of the media discourse — cannot win.

Then Aimee, who was working with us to make amazing infographics, made it into a proper one because, well, look at my diagram. I can’t even draw a circle, FFS. Also, we never did figure out where to put nice” or “bring an umbrella”, which, in fact, is pretty decent life advice for everyone, dating, raping, or nothing in between. Rape culture is real. It’s not a thing you just talk about on the internet, it’s a real thing that affects real people every day.

In fact, if you have the privilege of talking about rape or violence against women in abstracts because you think it will never affect you personally, then perhaps try shutting up and listening to people who don’t have that freedom (and frankly, given that rape happens in all kinds of contexts, to both women and men, you really don’t have that freedom, you just think you do)