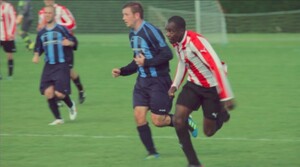 He has since played for Bohemians, Shamrock Rovers, St. Patrick’s Athletic and Longford Town.

As part of FARE week, the 1895 Trust, the Supporters Trust for Shelbourne FC fans, has produced a documentary focusing on the career of Mark Rutherford. Rutherford talks about his career in Irish football, how he deals with discrimination and why, into his 40s, he still plays football.
The Trust is also working with Show Racism the Red Card and the FAI at tonight’s game in Tolka Park against Drogheda United to raise awareness of the aims of FARE week amongst fans of both clubs.

The League Of Extraordinary Gentlemen