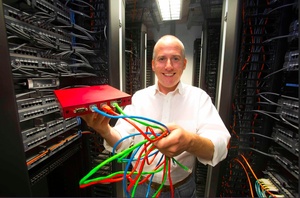 The Multipath re-router splits internet traffic across ALL available internet connections, “giving users the speed and reliability of all combined”.

Justin developed Multipath Networks with experts at the Telecommunications, Software and Systems Group (TSSG) at Waterford Institute of Technology The router can bond any combination of technologies, DSL, Cable, 3G, 4G, wireless.
All a user will need is a router running the Multipath software. They then attach all their internet connections to the router and the router adds the speed of all available connections.  The configuration is ‘plug and play’. Simply attach your current Internet connections to the router and it will automatically bond them, adding their speeds.

Crowdfunding for Multipath launches today on Indiegogo with a target of $30,000.