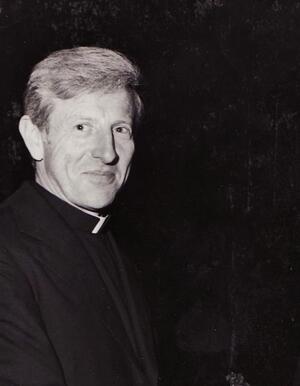 “The file was stamped “top secret” but it’s content related to one of the most explosive criminal investigations and trials this century. The file was so important that garda authorities were willing to trade it for a convict’s release from high security prison.”

“Within the folder were two documents, letters from a Circuit Court judge to the office of the Director of Public Prosecutions. They gave the judge’s thinking on a death that has mystified Ireland for nine
years.”

“Fr. Niall Molloy died in a violent argument in the bedroom of Theresa and Richard Flynn in Co. Offaly in 1985. The following year, with official investigations apparently concluded, Richard Flynn stood in a circuit court dock charged with manslaughter and assault.”

“He was acquitted after Justice Frank Roe accepted expert evidence that the priest may have not have died from his injuries but from a heart attack. An inquest jury found the priest died from head injuries sustained in the fight, a difference of opinion that led to nine years of speculation, some of it aired publicly in the Dáil.”

“This week it is Judge Roe’s letters to the DPP that bring new questions to a mystifying case. The Sunday Independent has also learned that Fr. Molloy’s last will and testament, believed missing for nine years, is said to have been sent to his Diocesan headquarters, and may have made provisions for Mrs. Flynn.”

“Judge Roe’s letters are remarkable, both for their contents and for the method by which they were made public. The Garda file in which they were held was one of 145 stolen by the late Martin Cahill, Dublin’s infamous General, from Garda headquarters.”

“Cahill used the file about Fr. Molloy’s death to bargain with the authorities, effectively promising its return upon release from an English high-security prison of a close criminal associate. The man was transferred to an open prison and then finally back to Ireland.”

“The file was returned but not before the General had taken photocopies of its content for further use. He told associates he planned to make its contents public, but he had not decided on the nature and date of their release when he died. Cahill had, however made sure a colleague was kept fully aware of the file’s location, and of its content.”

“Last week the Sunday independent was shown the two letters. One is hand-written and, from other examples of his hand writing, the hand of Justice Frank Roe, can be identified.”

“The first hand-written letter dates from before charges were made against Richard Flynn, and is a communication from Mr Roe to Eamon Barnes, the Director of Public Prosecutions. The letter says Mr Roe knew Fr. Molloy and the Flynns.”

“The second letter was written after the trial and is an explanation – the word ‘explain” is actually used – of Judge Roe’s reason for the dismissal of the charges against Richard Flynn.”

“Mr. Roe last week refused to discuss the letters. “That case is dead and buried,” he said. “I have nothing to say.””

“He also refused to comment on why he sent the hand-written letter to the DPP, and would not elaborate on his associations with Fr Molloy and the Flynns.”

“They were lovely people all of them.” he said “God bless them all.”

An extract from a front-page article by Veronica Guerin, published by the Sunday Independent almost 19 years ago, on October 16, 1994.

Related: The death of Fr Niall Molloy – as a member of the Flynn family, I’m appealing for the truth to be made known (Gemma O’Doherty, Irish Independent)