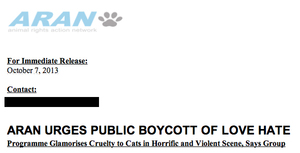 Ireland – ARAN has today slammed the producers of ‘Love Hate’ in relation to the first episode in a new series that showed two young teenagers literally blasting a cat to death and then laughing hard. ARAN is incensed and angered, and whilst we are aware the cat was not actually killed, this scene does irreparable damage to our work of curbing violent crimes towards animals and comes at a time of record reports of violence towards animals around the country. Already the group has been fielding dozens of complaints from viewers.

“Violence towards animals is on the rise in Ireland and this violent and disgusting scene in Love Hate does huge damage to our work of creating kindness towards animals on the streets,” says ARAN Director John Carmody. “We’re encouraging people to switch channels next time the programme airs.”

ARAN is now urging the producers of the show to make a generous donation to school educational programs in Ireland that would reach out to a younger generation about the importance of treating animals with kindness and respect.

But don’t worry, folks. He’s going to be just fine.

@SileSeoige still here. 9 lives and all that! 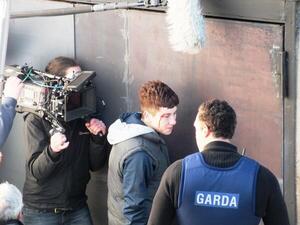 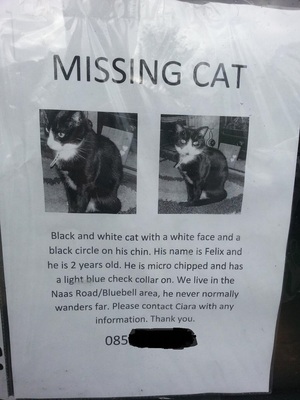