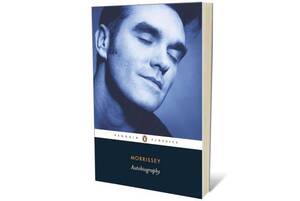 “I am back in the same studio some weeks later to watch a taping of Friends, having been invited to Reprise Records. Friends has become the most popular TV show in the world, showing life as it is commonly lived in America’s carefully preserved unreality. The cast is friendly, and I am immediately taken aside by the scriptwriters and asked if I’d jump in on a newly jumbled plot-line where I appear with the character Phoebe in the Central Perk diner, where I am requested to sing ‘in a really depressing voice.’ Within seconds of the proposal, I wind down the fire-escape like a serpent, and it’s goodbye to Hollywood yet again.”

On being disliked:
“Whenever I’d overhear how people found me to be ‘a bit much’ (which is the gentle way of saying the word ‘unbearable’), I understood why. To myself I would say: Well, yes of course I’m a bit much — if I weren’t, I would not be lit up by so many lights.”

On the recording of final Smiths album, Strangeways, Here We Come:
“I begin the vocal for ‘Stop Me If You Think You’ve Heard This One Before,’ when Stephen [Street, producer] stops me, even though he hasn’t heard this one before. ‘Er, Morrissey, I think there’s a grammatic error here — Who said I lied because I never …’ he aids, helpfully. ‘Yesssssssss,’ I hiss, like an adder on heat, ‘it’s meant to be there,’ and now I know how Joan of Arc felt.”

On an encounter with Siouxsie Sioux, with whom he’s fallen out with after recording a duet:
“On the doorstep [Siouxsie] asks me whether right or left would be the best direction to find a taxi, and although her best bet would be left, I suggest she turns right. It is churlish of me, but it is she who has set the pace.”

The 25 Most Morrissey-y Quotes in the Morrissey Autobiography (Oliver Lyttelton, Vulture)

The Laziest Morrissey Fan In The World