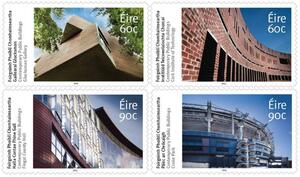 The Lewis Glucksman Gallery at UCC, Cork. Designed by O’Donnell + Tuomey Architects, it was awarded the Royal Institute of the Architects of Ireland (RIAI) Downes medal in 2005.

The Cork Institute of Technology in Bishopstown (60c) Designed by de Blacam and Meagher Architects. It received the RIAI Best Educational Building Award in 2007.

Fingal County Hall in Swords, Co Dublin (90c) It received an award from RIAI in 2007 and was designed by Bucholz McEvoy Architects.

Croke Park in Dublin’(90c) Designed by Gilroy McMahon Architects, it was awarded a gold medal in the RIAI 2007 Awards.