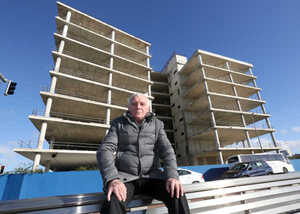 (Eamon Dunphy at the Anglo HQ shell on the quays, Dublin earlier this month)

“If you get caught doing something wrong in England you get punished, like the former Cabinet minister Chris Huhne, and his wife [both jailed for swapping penalty points]. If that happened in Ireland there wouldn’t be a hope in hell that they would serve one day. It wouldn’t have even got to court.
There’s a penalty points scandal here now and the Garda Commissioner is one of those who has had his points deducted. It’s a jungle here. There’s no law.
…We couldn’t have called Rupert Murdoch and his son up. We couldn’t have got to the bottom of the phone hacking. We don’t have the institutions or the will. We just don’t live in that kind of democracy. We don’t have a democracy. It’s a total and utter sham here.

…Why don’t Irish people rise up? Well, their representatives are in the loop with the big boys. That’s why. It’s no secret, and most of the journalists are in the same loop. It’s a rotten society.”

End Of Season Round Up