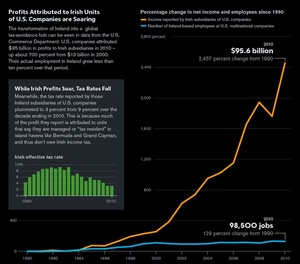 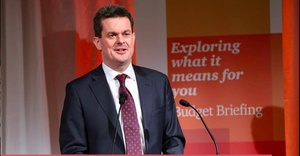 The grand architect of much of that success: Feargal O’Rourke, the scion of a political dynasty who heads the tax practice at PricewaterhouseCoopers in Ireland. He advises both multinational companies and the government on tax policy and has emerged as his country’s leading defender.

“Under no circumstances is Ireland a tax haven,” O’Rourke said recently at his corner office on the River Liffey in Dublin, a ritual stop for many tech companies in their Irish quest. “I’m a player in this game and we play by the rules.”

In that game, multinational companies find ways to legally avoid income taxes in the countries where most of their customers are.

Google cuts billions off its tax bill each year by sending profits through Ireland to a mailbox in Bermuda; Facebook (FB) sends them through Ireland to Grand Cayman; LinkedIn uses Ireland en route to the Isle of Man. O’Rourke advised each company on its arrangements, according to two people familiar with the matter.

He also persuaded regulators to eliminate a withholding tax on profits that corporations move out of the country — while separately advising his cousin [Brian Lenihan] who was finance minister.

O’Rourke often speaks loudly and excitedly, gesturing with his hands, yet is careful not to let disagreements turn into arguments. He said the finger-pointing at Ireland and at his profession is misdirected, and politicians around the world complaining about tax avoidance have only themselves to blame.
“Why should Ireland be the policeman for the U.S.?” he asks. “They can change the law” — he snaps his fingers — “like that! I could draft a bill for them in an hour.”