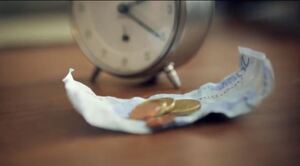 “Should checking her purse come before his check-up?”

But it’s not allowed to be screened on Irish TV.

“We’re not allowed to screen it on any channel because the Broadcasting Act 2009 prohibits any ads calling for changes to the laws of the land (which is interesting in and of itself).”

“Our ad is seeking the Constitutional Convention to examine the possibility of greater protections for economic, social and cultural rights in Bunreacht na hÉireann, so clearly falls foul of the legislation.”

“However, of additional interest is that the Government has already signed up to international treaties promising to protect these rights (e.g. International Covenant on Economic, Social and Cultural Rights, ratified in 1989), and successive Irish governments have pledged to deliver those social and economic rights since the 1919 Democratic Programme.”

“So really, this ad is only asking for something the Government has already pledged to do.”

Serving Up The Classy

Anything Good In Ireland’s Own?