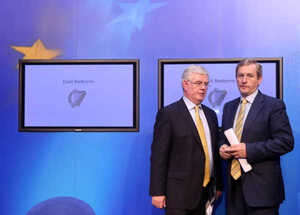 “Eamon Gilmore, leader of the Irish Labour party, said he hoped the cabinet would decide on Tuesday to set a date for a national vote on endorsing full equality for same-sex marriages. Gilmore said it would be “important to win this referendum” which could be held as early as mid 2014.”

We Don’t Know How To Put This