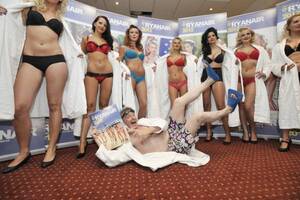 “The only reason we continue with the calendar, apart from the fact it raises £100,000 for charity a year, is that the cabin crew love it. Some of those feministas out there have a disproportionate voice saying its sexist and exploitative. It’s not, it is voluntary. Then the humourless harpies say, ‘Why aren’t there boys?’ Because they don’t selI.”

“The mothers and grannies are flying for British Airways and the daughters are on Ryanair. We do have ugly people — I am ugly for God’s sake – but the thing about flying is, it is genuinely an attractive career opportunity for young girls.”

“We actually have one of the highest proportion of female board members, two out of nine, 22 per cent. That’s better than most. We are not having them for a gender balance but because they are good. One thing that is driving our customer improvements has been the arrival of two ladies on the board who say, ‘We need to soften this, we need to be less aggressive and macho’.”

“Long maternity leaves are not a problem for him, even though cabin crew are grounded as soon as they discover they are pregnant. “We have a reputation of being wild boys out there, but you can’t flout the laws.” What does drive him “mad”, though, is paternity leave – “the idea that the father can now skip off for a couple of weeks”. When his four children were born he didn’t take any time off. “I couldn’t wait to get back to work. I don’t want to be at home with young babies, breastfeeding and changing nappies. That is not my function in life. This bonding stuff is rubbish.

“Men tend to bond with their children when they are walking, talking, following football – then we have something to say to them. When they are 0 to 9 months old, all they are interested in is milk and mammaries – it’s useless. The fathers who feign interest at that stage are Just making it up.”

“There are things fathers should do and mothers should do. I did the first nappy in the hospital and that was pretty much the only one … we sow the seed, women have the babies and after that we provide. It’s all biological.”

“Women should work. Arab societies where they suppress women are simply doomed to failure. But most women, if given the choice, would actually stop working when they have young children.”

“Women are presented with an enormous number of challenges. If you don’t breastfeed you are a failure but sometimes it doesn’t work.” He is equally concerned about the expectation on fathers to be at the birth. “What are men doing on the delivery ward? We are redundant in the process but there is an enormous pressure to be there, holding hands and saying ‘push’.

“Actually once the contractions kick you are entirely bloody irrelevant. I grew up on a farm, so there was nothing I hadn’t seen before, but a lot of men are genuinely traumatised by the experience.”