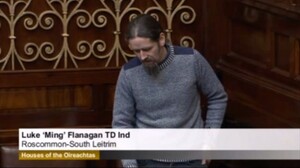 It may sound wacky.

Luke Ming Flanagan re-introduced his Cannabis Bill in to the Dail today with this plain talking plea for common sensei.

“Thank you Ceann Comhairle. I’m seeking leave to introduce ‘The Cannabis Bill 2013’ – while I don’t expect – I could be wrong – this House to support it – in the short term, I do believe in the long term that this will be seen as very progressive legislation. In the same way that people in this chamber have stood up in the past and spoke in favour of legalising contraception and divorce – and many people stayed quiet about it, I think in the future this issue will be looked at in the same way – and I believe we will see a time where the proposals that I am making and the bill that I am putting forward will make it. And one of the main reasons I believe this is, is because policy around the World is moving in this direction.

The situation is, one million people in this country have admitted to using cannabis – that includes two cabinet ministers who have publicly admitted to it – openly, no problem about it. And I would be shocked if it wasn’t the case that there were more there.

Over a million people have decided that, well, this law – it shouldn’t be there. 150,000 people regularly flout this law. 100,000 people have now received a criminal record – now that’s an estimate from the Department of Justice, when I asked them to furnish me with the figure for the number of people with a criminal record for the possession of cannabis – I was told that they didn’t have the resources to do it, and it really wasn’t worth their while.

But from putting together the figures that I had available to me – over 100,000 people have a criminal record for the possession of cannabis. And if, if my Bill was passed and turned into law – this would mean these 100,000 people could get back, actively involved in areas such as working in education and working in areas where they are currently de-barred from.

And even if their economic activity was to rise by one thousand euros a year – that would be worth one hundred million euros to the Irish economy. There is also the potential tax dividend from legalising it, there is also the savings to the Criminal Justice System, which arrests and brings over 8,000 people every year to court over this – that money would be saved.

One of the big benefits of actually passing this Bill would be that otherwise law-abiding citizens, young people, many of them young males would then have no reason, or would see no reason why they should be in conflict with An Garda Siochana. And on other issues of crime – it would leave them more open to cooperation with An Garda Siochana – there would be many benefits in it.

Now I intend, before the year is out, to bring this for debate and to get it discussed – because two weeks ago I brought this issue to the floor of the Dail, and I have to say I was pleasantly surprised with the input of many of the Government’s deputies. And over the next year I hope that through NORML, an organisation that has been set up to drive this issue – to try and convince more people that operate out of this chamber that it’s the right thing to do.

And that is to invite in two doctors Cathal O Suilleabhain and Gareth McGovern from NORML to come to the Health Committee and discuss this issue. And also for doctors who are against what I propose – to come and discuss and debate this issue.

I’m also proposing that the Health Committee write to Dr. Donald Tashkin from the University of California in Los Angeles, the foremost expert on lung capacity after cannabis use.

We need to get this man in to get the facts. I’m also suggesting, and I will be writing to the Justice Committee asking them to invite the former Head of Cambridgeshire Police Force Tom Lloyd to come in and talk to them – to inform them from a criminal justice perspective why he thinks that this should be done. So that’s all I’ve got to say on this, I will be returning to it on numerous occasions over the next year.