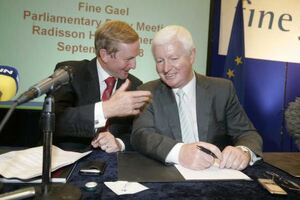 Yesterday, Fine Gael’s director of organisation and strategy, Frank Flannery wrote in the Irish Times about how he, as chair of the Forum on Philanthropy and Fundraising, has set out to increase the level of private investment in public good from about €500million to €800million by 2016.

He said his strategy is four-fold and includes a One Percent Difference Campaign, which encourages Irish people to give 1% of their time or money to a cause; ‘investment in building fundraising capacity’; changes to tax and regulation ‘to increase trust in the sector, increase transparency and encourage greater giving’; and the creation of a social innovation fund.

“My principal focus has been on the Social Innovation Fund, which I also chair. Government has committed €5 million initially, if that funding can be matched from philanthropic funding. We can persuade business, and in particular the major foundations of multinational companies operating here, to invest in the social innovation fund.”

“If the fund is to be a success, we must identify new sources of funding. I want to attract new money into the sector and I came up with the idea of reaching out to people who are not tax-resident in Ireland but still have a strong connection to the country.

My idea was to offer an increase in the number of days such a person could stay in Ireland up to the international legal limit in return for a €5 million investment in a good cause and a payment of €1 million a year to the exchequer for 10 years.”
…
“The proposal may seem controversial, but I make no apology. If we do not attract significant investment quickly, we will hit a philanthropic cliff.”

Tax exiles should be able to live more days a year in Ireland if they give to charity but why can’t they pay tax? http://t.co/dzF3Lm7XIc