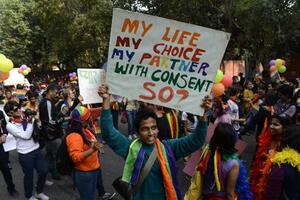 Sex between consenting gay partners in India is once again illegal

The decision means same-sex relations in India are once again subject to a 153-year-old law, passed under British rule, which defines them as “unnatural” and punishable by a potential 10-year jail sentence. The law was in effect repealed in 2009 by a landmark ruling by the high court of Delhi, the capital.

Activists had expected the supreme court simply to rubber-stamp the earlier ruling. The institution is known for its broadly progressive judgments, which often order politicians or officials to respect the rights of the poor, disadvantaged or marginalised communities.

“It’s a tremendous blow. It’s unprecedented for a court with a long history of expanding rights to reduce dignity not protect it,” said Gautham Bhan, a prominent activist.