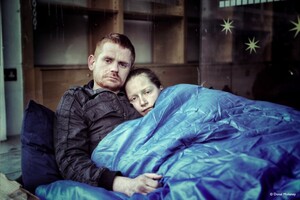 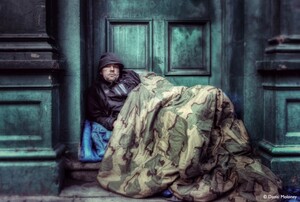 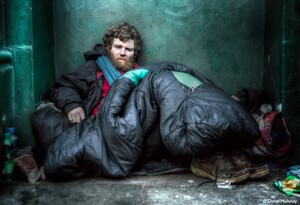 Further to Donal Moloney’s series on the homeless in Dublin.

Thomas and Helen are both travellers. They met two weeks ago shortly after Thomas had been released from prison for being drunken & disorderly. Thomas says: “We just clicked”. . Thomas is 32 but says he feels “60”. He has 6 brothers and 5 sisters. He has been sleeping in the doorway [top] with Helen since his release 2 weeks ago. He has been homeless for 9 years. He expects to serve another short prison sentence in the near future on other charges of being drunken and disorderly. Helen is 25 and was made homeless more recently
Joe [above] is a heroin addict and homeless many years. He has been married twice and has a few kids. As a teenager he moved to New York and became a carpenter. He was a heavy drinker and consumed “3 bottles of whiskey a day”. He loves to read as does his mate John [middle] (20 yards down the street). It takes them “away from the day”.

Previously: Caring For The Pigeons

Life On The Streets