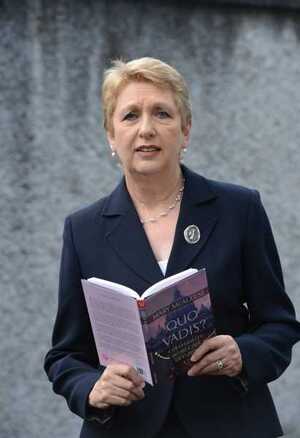 “I don’t like my Church’s attitude to gay people. I don’t like ‘love the sinner, hate the sin’. If you are the so-called sinner, who likes to be called that? We also know that within the priesthood a very large number of priests are gay.”

[ Speaking during a lecture at the Royal Society of Edinburgh] Mrs McAleese said she studied suicide among young Irish males, many of them gay Catholics who grew up being told their sexuality was “intrinsically disordered” and “evil”.

When she took this research to the new papal nuncio in Dublin she was surprised by his response.

She said she was asked: “What do you want me to do? Do you want us to turn our back on tradition?” Her answer was: “Yes, if it’s wrong.”

“Things written by [former Pope] Benedict, for example, were completely contradictory to modern science and to modern understanding, and to the understanding of most Catholics nowadays in relation to homosexuality.”

Mrs McAleese drew a ­comparison with the Church’s attitude to Jews. It took almost two millennia formally to revise the “Christ-killer” slander which had been repeated down the decades.

President Wins First Round In Regal-Off