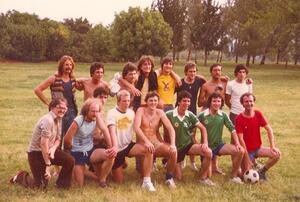 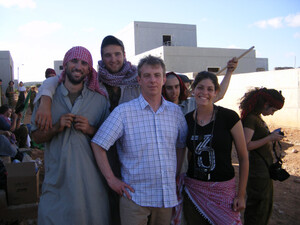 [Volunteers at a Kibbutz in Dafna, northern Israel, 1980, top, and Eamon Delaney, above, with Israelis on military duty in 2012, “which included dressing as Arabs for ‘riot-training’]

I was living in a kibbutz in northern Israel in 1982 when Ariel Sharon as defence minister, ordered the ambitious and reckless invasion of Lebanon.

The kibbutz system, familiar to many Irish volunteers over the decades, was a left wing commune network, loosely associated with the establishment Labour party which had ruled Israel since its creation in 1948.

However, in 1977, the right wing Likud party came to power and in 1981, Likud was re-elected with Sharon as Defence Minister. The kibbutzniks were getting used to a Likud government but the prospect of Sharon as Defence Minister filled them with dread. They saw him as hot headed, glory hunting (he’d already had a controversial army career) and prone to needless confrontation with the surrounding Arabs.

The big question in 1982 was would Israel invade Lebanon so as to drive the Palestinian Liberation Organisation (PLO) away from Israel’s northern borders, where it was firing rockets, just like Hamas had been doing recently from Gaza. And as with Gaza, the Israel philosophy is to strike back disproportionately to deter further attacks.

But, with Sharon, it seemed to be even more than that, and the kibbutz members were convinced that he was looking for any pretext to invade Lebanon and rearrange its political landscape.And so it would be. We woke up one morning and saw a line of Israeli armour and vehicles streaming northwards, and the fisherman that I worked with in the fish ponds were gone – called up for military duty overnight.

Sharon promised he would only go 40km into Lebanon to drive the PLO north and carve out a safety zone in south Lebanon. But, giddy with apparent early success, he went all the way to Beirut, encircled the PLO and attacked the city with relentless airstrikes that appalled the world.  Most infamously, he allowed Israel’s Lebanese allies, the Christian Phalange, to enter the Palestinian refugee camps of Sabra and Chatilla, knowing full well they were sworn enemies from the Lebanese civil war.

A massacre ensured over two days, while Israel army stood back, claiming ignorance. The Israelis didn’t perpetrate it, but they seem to connived at it and, to this day, Sharon has been personally blamed, including in European countries where indictments had been made against him. Worse still, the Israelis got bogged down in Lebanon and overstayed their ‘welcome,’ giving rise to a new and ruthless resistance movement against Israel– Hezbollah.

Sharon was disgraced, but he didn’t leave Government and to the amazement of the kibbutzniks he himself became Prime Minister in 2001, where he continued his confrontational style. Most controversially, he accelerated the building of settlements in the Occupied Territories.

These are not in the original Israel of 1948 but are lands captured in the Six Day War of 1967 and which many Israelis, especially the kibbutzniks, believed would be traded as ‘land for peace’, ie returning the West Bank to Jordan in return for a peaceful recognition.

But the kibbutzniks and liberals hadn’t reckoned on the Israeli right, many of them religious Zionists, who moved in and started building right next to angry Arab towns. In 1982, we could cycle from the kibbutz over to the West Bank town of Jenin to go shopping. There was no Wall and barely a fence. Today, you wouldn’t go there under Israeli auspices, unless you were in an armoured car.

Having spent so much time in Israel, I always kept an eye out for developments there. While in Prague I saw a headline about more riots in Jerusalem. I went into a falafel shop run by Israeli who told me ‘Sharon has really done it this time, he’s invaded the Temple Mount. Curse him, I’m never going back’ the Israeli said ruefully.

It was September 2000, and Sharon insisted on visiting (intruding onto) the sacred Temple Mount in Jerusalem, the mosque complex with its famous gold dome roof, where moslems believe Mohammed ascended into Heaven, but which is built on the ruins of the Jewish Second Temple (The Western Wall), and also the holiest site in Judaism. It’s probably the most bitterly contested real estate in the world. But Sharon saw fit to ‘visit’ it, accompanied by armed police, and the resulting riots directly sparked the second Intifada, except this time it was an armed insurrection by the Palestinians.

And yet even Sharon seemed to tire of the confrontation and suicide bombings and repression, and moved towards peace.

He unilaterally withdrew from Gaza, saying it wasn’t worth the hassle of holing it, and then left Likud to form a political party called Kadima, which was committed to a negotiated peace and possible further withdrawals from the West Bank. However, on the brink of a new such Government, Sharon suffered a major stroke which sent him into a coma and from which he never recovered.

Right wing Israelis and Christian evangelicals (who support Israel) saw the stroke as divine punishment for his withdrawal from Gaza, which fell into the hands of Hamas. Palestinians saw it as divine punishment for Sabra and Chatilla. More likely, it was a consequence of his huge weight and unhealthy diet. Either way, it deprived us of what would have been an interesting moment in Israeli life: a popular, centrist party led by a hard man driving a lasting peace deal with the Arabs.

It was a regret expressed to me two years ago when I was on an Irish press trip to Israel. Sharon’s predecessor as Likud leader, Yitzhak Shamir, had just died, another hard man who fought the British in the 1930’s and went by the ‘nom de guerre’ Michael, after Michael Collins whom he revered. ‘The hard men make the peace’ suggested an Israel official ‘It is the same in your country, no?’ He meant Collins but also, more latterly, Gerry Adams and Paisley. The expectation was that Sharon might have done the same. 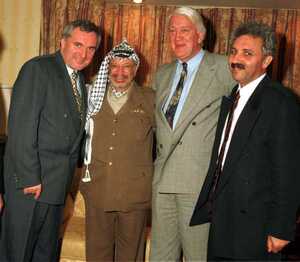 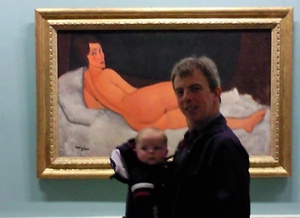