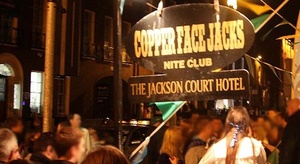 Not a nice feeling being crushed between a wall and the barriers due to the huge stampede at Coppers. I’m just so glad we all got out okay!

An 18-year-old woman, who was one of seven people injured in a crush outside Copper Face Jacks nightclub on Harcourt Street in Dublin, is in a critical condition. She is being treated in St James’ Hospital in Dublin. The incident happened outside Copper Face Jacks on Harcourt St at about midnight. Gardaí say around 1,500 people were queuing outside the nightclub at the time.