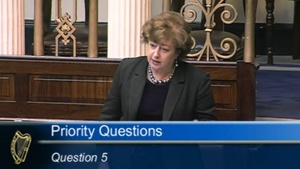 I submitted a Special Notice Question today in relation to the RTE payout/ #pantigate issue. It was refused. Text to follow. (1/2)

The apology and payment of damages by the national broadcaster to a private organisation without substantive just cause and… (2/3) — Catherine Murphy (@CathMurphyTD) January 29, 2014

the dangerous precedent for public discourse this action sets.” (3/3)

In an open letter to RTE, Brian Barrington, a legal expert on equality and human Rights, writes:

“…it is now incumbent on RTE to provide clarification on what it will not permit to be stated in other contexts also. RTE should therefore make clear what it will and will not tolerate in the following scenarios:

a. a person states that women should not be allowed to work outside the home. Is it permissible on Irish Television to offer the opinion that the person is a misogynist, even if one makes clear that he or she believes that misogyny includes discrimination against women?

b. a person states that Ireland should have fewer immigrants. Will RTE censor any person who states that the speaker is xenophobic?

If, however, any of the above is permissible, will RTE explain why it is not equally permissible to state that a group that campaigns against same sex marriage is homophobic?

“In its apology to the Iona Institute, RTÉ stated “is an important part of democratic debate that people must be able to hold dissenting views on controversial issues”, in terms presumably agreed in advance with the Iona Institute.

What these words tell us that it isn’t just a definition of marriage or homophobia that the Iona Institute seeks, but the power to enforce definitions that maintain proper order, including the definition of democracy.

According to the idea of democratic debate shared by RTÉ, the Iona Institute and Irish Times columnist Noel Whelan (and many other people), democratic debate doesn’t need to account for inequalities and prejudices enforced by dominant institutions.

It doesn’t need to account for the power to summon lawyers to threaten and prosecute.

It doesn’t need to account for the history of violence perpetrated against oppressed minorities and communities and the social wellsprings of such oppression.

It doesn’t need to account for the fact that calls for tolerance and respectful debate and liberal persuasion are a great deal easier in these parts when you are invited to speak up on behalf of the oppressive tendencies of the State, not against them.