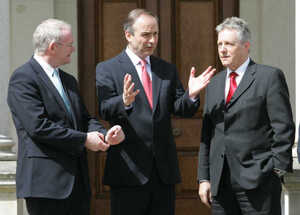 NI First Minister Peter Robinson in an interview with Steven McCaffery of The Detail has said the Irish government is avoiding a “hidden history” that ties it to the birth of the Provisional IRA.

I think there has been denial on behalf of Irish Governments for some considerable time about the role played by government ministers and officials in terms of the growth of the Provisional IRA. People don’t want to talk about it. It’s not a case of being embarrassed, they seem to be offended if the issue is raised, but at the same time are quite happy to point the finger at the British state.

It is abundantly clear that the responsibility that seemed to fall on (Capt James) Kelly, was one that was placed on him by the State.

It is a period of time which shows very clearly that the Irish State was funding the guns going to the Provisional IRA, was preparing itself to invade Northern Ireland, and now of course they sit back and try and draw a blind over this area of history.

The death of almost 1,800 men, women and children at the hands of the IRA was a hideous crime against their neighbours, against their country and against the proud ambitions of Irish Republicanism.

But it is not a crime for which the Irish Government has culpability.

It is a narrative which distorts the facts of an unprecedented crisis in Irish history and deliberately ignores the decades of concerted policy and action in the Republic of Ireland aimed at thwarting the subversive threat posed by violent republicanism and loyalism.

Genuine culpability or just whataboutery to deflect from unionism’s own failings?