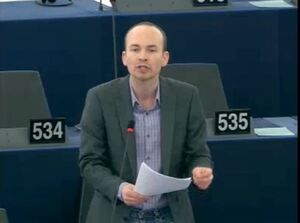 National broadcaster, RTE, has censored Rory O’Neill for calling out homophobia, even worse than that, it has paid out 85,000 euros reportedly in damages to those accused of homophobia.

It’s an attack by the right wing conservative forces in Ireland, acceded to by RTE, designed to censor debate in advance of a likely referendum on marriage equality. We must refuse to be silenced.

When John Waters says that gay marriage is ‘a kind of satire’, that is homophobia.

When Breda O’Brien says ‘equality must take second place to the common good’, that is homophobia.

When the Iona Institute campaign against gay marriage because it is gay marriage, that is homophobia.

In the words of Rory O’Neill, these people should get the hell out of our lives.”

Gay, straight, undecided – everyone should watch this. Brilliant Panti’s Noble Call at the Abbey Theatre http://t.co/QgQj6l516K via @youtube

Currently at 55,000 views on YouTube, Panti’s Noble Call video is kind of a big deal.