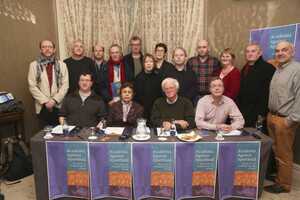 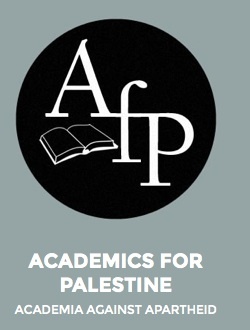 [Academics for Palestine, top at Buswells Hotel, Dublin this morning and the group’s logo

Irish academic researchers have collaborated in EU-funded projects with Israeli counterparts who make drones, develop high-tech weapons and engage in “counter-terror” activities with the Mossad, according to publicly available EU documents examined by members of Academics for Palestine (AfP), a new organisation launched this morning in Dublin.

In all, according to AFP, Irish universities have “collaborated with Israel in 257 projects to date, seven of them listed as “security” and  13 as “aerospace”.

*Researchers at the University of Limerick collaborated with an Israeli security company, Athena GS3-Security Implementations Ltd, on an EU-funded programme worth almost €4 million from April 2009 to March 2011. (The project researched digital support systems for first responders.) Athena, on its website, claims to be a world leading counter-terror advisory group with indigenous expertise from the Mossad and other elite Israeli counter terrorist units.

* UL also partnered with Israel Aerospace Industries (IAI). IAI are key players in the development of security and surveillance for Israel’s separation wall, deemed illegal by the International Court of Justice (ICJ).

* Other academics, at Trinity College Dublin, have worked with Israeli drone manufacturers Elbit Security Systems and two other Israeli firms in an airport security project, still ongoing, and on a separate project with Israel’sInternational Security and Counter-Terrorism Academy.

138 Irish academics have signed a pledge, organised by AFP, to boycott such collaboration with Israeli institutions “until Palestinian rights are respected.”

And Was Jerusalem Builded Here?