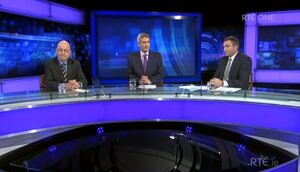 They also discussed the so-called directive that Garda Commissioner Martin Callinan sent to former Garda John Wilson and Sgt Maurice McCabe separately on December 14, 2012. The ‘directive’ was delivered verbally to the two gardaí. Mr Wilson said last night that the superintendent that gave him the message told Mr Wilson that he was under instructions from Commissioner Callinan not to furnish Mr Wilson with a written copy of the directive.

Commissioner Callinan maintains this directive called on both men to co-operate with the penalty points inquiry, led by Assistant Commissioner John O’Mahoney.

But Sgt McCabe released a statement on Monday night saying the Commissioner’s claims were ‘gravely misleading and false’ while last night Mr Wilson said he believed the directive was the equivalent of a ‘gagging order’.

The directive was issued just a few days after Mr Wilson was found printing off records from the PULSE system in Cavan and days after several high-profile people were named in the Dáil as having had penalty points quashed.

David McCullagh: “I want to ask you a question. Gerry Adams made the point in the Dáil during those exchanges that the Taoiseach was given that dossier less than a week ago and now we have an independent barrister appointed to look into it to see if there’s anything to investigate there, as you say, the Taoiseach has moved fast. Alan Shatter was given this two years ago.”

Charlie Flanagan: “There are two charges levelled on a continuous basis by Niall Collins and Fianna Fáil against Alan Shatter and they are as follows. Firstly, that he was given documentation two years ago, which he sat on. Not true. We will see tomorrow and we’ve already evidence that Alan Shatter acted on documentation that was before him: some of these issues and allegations have already been the subject of an examination by the GSOC office. In fact, in fact…”

McCullagh: “Then why has Mr Guerin been appointed?”

Flanagan: “In fact, David, in some cases, in some cases, charges have been brought, due process has taken place in the courts, and people have been convicted, that’s exactly as it should be through the criminal law. The second charge against Alan Shatter is that in some way he misled the Dáil by saying that Sgt McCabe, a central figure, did not cooperate with the investigation. I say, having read the documentation now published and having regard to what Sgt McCabe, an honourable man, said last night, I believe there are failures on both sides. I find it inexplicable that an investigation could take place at the behest of the gardaí, under Assistant Commissioner O’Mahoney without Sgt McCabe, a central figure being involved. How is it? How is it the investigation took place?..”

McCullagh: “How is it that Alan Shatter didn’t seem in the least bit concerned about it?”

Flanagan: “No, I believe that this, that this issue is, has been the subject of a review of papers in Alan Shatter’s office over the last and I believe we’ll know this tomorrow. The second issue is, as far as Sgt McCabe is concerned, there are reports that he was asked on more than one occasion…”

Flanagan: “..that his issues would be…letters from the Department of Justice directly to him and the content of the transcript of the tape last night.”

Flanagan: “It seems to me inexplicable that Sgt McCabe didn’t know that there was an investigation under way.”

McCullagh: “Hold on. The thing last night is quite clear. What he was told: ‘The Commissioner is now directing you to stop accessing PULSE and he disputes whether he was doing that and, anyway..’And if you have any concerns they can be brought to the attention of the Assistant Commissioner’. How is that a direction?”

Flanagan: “Yes, well, I find it inexplicable that Sgt McCabe wasn’t aware of the fact that an investigation was taking place.”

McCullagh: “But the Commissioner and the Minister said that he was directed to cooperate with the inquiry, now is that a direction?”

Flanagan: “Well, I believe that there is more to the story than we’ve seen and I look forward to the minister making that statement tomorrow in the Dáil.”

McCullagh: “The Commissioner said that on that date…”

Flanagan: “And standing over what the minister has said, under Dáil privilege.”

McCullagh: “The Commissioner said that on that date that Sgt McCabe was directed to cooperate with the inquiry and quite clearly if that, if that transcription is correct, he quite clearly wasn’t.”

Flanagan: “Listen the fact of the matter here is that Sgt McCabe knew that an investigation of some form was taking place because he was given more information than was actually contained in the transcript.”

McCullagh: “And did he have the Assistant Commissioner’s phone number in his, in his iPhone.”

Flanagan: “Listen, I’m not in a position to answer as to whether Sgt McCabe had people’s phone numbers on his person. What I am saying, David, and you know this is a complex and serious issue, what I’m saying is there were failures on both sides. How an investigation could take place over a period of months, the central figure wasn’t involved and happened to ring up wondering what the story was when the whole thing was finished.”

McCullagh: “What was Minister Shatter’s failure then? Well, Niall Collins is the one who..”

Niall Collins: “No you just said there’s failures on both sides, Charlie, I mean you’re being entirely inconsistent here.”

Collins: “Is it good enough that the Minister for Justice will come in to Dáil Éireann under privilege and seek to completely discredit the character of Maurice McCabe.”

Flanagan: “No I don’t accept that will happen.”

Collins: “You have testified on numerous occasions that Maurice McCabe is very credible so has Pat Rabbitte, so has members of the PAC [Public Accounts Committee]. Anybody that has met Maurice McCabe is happy that he is credible in terms of what he is saying. Yet the minister choose to come into the Dáil and seek to assassinate his character.”

Flanagan: “I think that is the kind of hyperbole that is actually damaging to the process.”

McCullagh: “Well hold on a second.”

Flanagan: “What Minister Shatter said under Dáil privilege was that it was his view that Sgt McCabe did not cooperate with the investigation.”

McCullagh: “But how could he cooperate when he wasn’t asked?”

McCullagh: “Ok, well just in relation to the revelation last night, you know, you, some people say that’s a direction – I don’t see how anybody who understands the use of the English language could think that was a direction but anyway that’s beside the point. Why was it delivered verbally and not in written form? Why, if he did disobey a direction, was he not disciplined for it, and why on earth did the Assistant Commissioner not pick up the phone and ring him?”