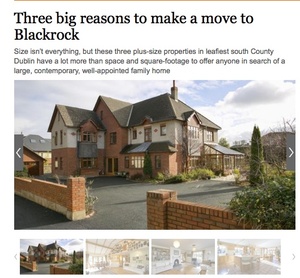 I was just reading the usual gushing ‘cut and paste’ from the estate agents brochure in the Irish Times about a multi million euro house in Blackrock [Co Dublin].
They failed to mention that what they describe the house as ‘not overlooked; in front is the pitch and putt grounds of the St John of God’s Hospital’. This area is ear marked for a future Halting Site for Traveller Accomodation. Surely instead of stoking another bubble they could have taken a quick look at the council development plan to show what your millions will actually buy…

Should they have mentioned the halting site?