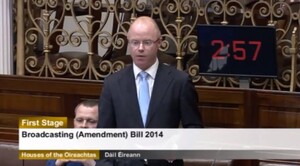 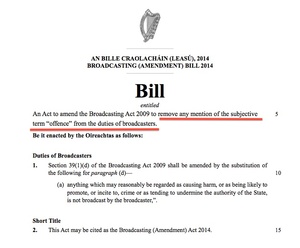 “Earlier this year the scandal known as Pantigate erupted. It was kicked off by comments made by Rory O’Neill on the Saturday Night Show. It was escalated by the response of those branded homophobes who consequently threatened RTE with litigation. RTE capitulated and paid over €85,000 to six individuals. Maybe they should and maybe they shouldn’t have paid out, but they did so because of a serious flaw in the current Broadcasting Act.

“Here’s what RTE’s managing director, said in a letter to staff: “Having regard for broadcasting compliance issues, the seriousness of the legal complaints, and the decision by the complainants not to accept RTÉ’s proposed remedies, we decided that a settlement was the most prudent course of action. Senior counsel was consulted and confirmed that the legal position was far from clear.”

“This bill is an attempt to clarify one legislative issue at the heart of the Pantigate episode. That is, the removal the term “offence” from Section 39 of the Broadcasting Act. As legislators, we have a duty to show the LGBT community, and society at large, that free speech is something that the Oireachtas values. Something that we can – and will – protect.

“The existing Act requires broadcasters to not broadcast ‘anything which may reasonably be regarded as causing harm or offence’. This Bill removes the wording ‘or offence’. I do not believe people should be censored for saying offensive things, whether or not that offence is reasonably caused, or not. Determining what might be considered offensive – by anyone in our society – is a pretty hefty obligation to put on our broadcasters. It’s especially difficult when it comes to live broadcasting. TDs know that offence is something some people are determined to take no matter what the topic. Legislation that molly coddles those likey to take offence – regardless of what they’re offered – gags free speech, Harms public debate, and makes uncomfortable truths, invisible truths.

“The Act as it currently stands, and the recent scandal, will undoubtedly cause broadcasters to err on the side of caution.

“As a result, if we don’t make this change, free speech will begin to suffer right away. And litigious bullies can shut down any conversation they deem inconvenient.

“What this bill proposes, therefore, is to remove the reference to offence. Section 39 (1) (d) would therefore read: Every broadcaster shall ensure that “anything which may reasonably be regarded as causing harm or as being likely to promote, or incite to, crime or as tending to undermine the authority of the State, is not broadcast by the broadcaster.”

“We’ve heard in the press the minister is thinking about changing “harm or offence” to “harm or reasonable offence”. Any qualification of the term offence still hamstrings our broadcasters.It is also potentially troublesome in relation to European law.

“Here’s what the statement says “As Ireland evolves into a more multicultural and ethnically diverse nation it is important that RTÉ reflects these changes. But equally programme-makers must be sensitive to areas of public opinion that are absent from public discourse because of the reticence of some people to express their views”.

“So we’re asking RTE not to broadcast anything that could cause offence, but at the same time to represent minority views, which we don’t often hear – which for whatever reason, may cause offense to some people in our society.

I look forward to seeing what the Minister brings forward, and hope to be able to support his proposals. However, the legislative process takes time. Were the Government to accept THIS Bill, it would almost immediately fix one of the biggest flaws in the legislation, and send a strong signal to broadcasters, minority groups, and those they offend, that Ireland values free speech.” 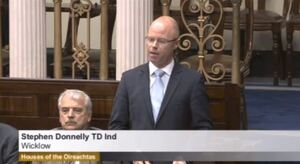 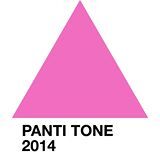 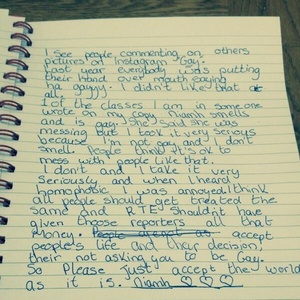 ‘I Take It Very Seriously’