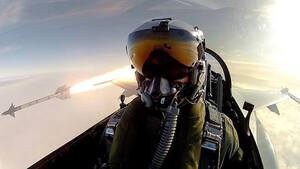 A Danish airforce F-16 pilot launches an AIM-L9/M missile on a training exercise.

Dave Cencotti of The Aviationist adds:

Self-portrait photographs (nowadays known as “selfies“) have always been a must among fighter jocks and you can find thousands taken by military pilots in the most unusal flight conditions. However, selfies taken while launching missiles are much more rare just because firing activities involving the launch of an air-to-air missile don’t take place too often.

Here’s a video of the incident.