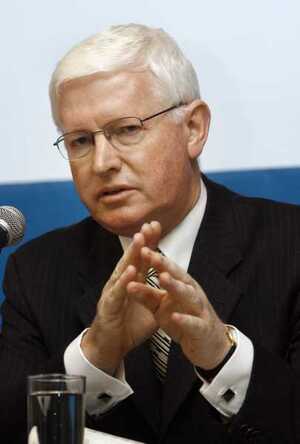 He could always get into bananas.

“I have informed the Chairman of the Rehab Group board, Mr. Brian Kerr, that I wish to step down as a director of the Rehab Group and any other group boards with immediate effect.
“It is a step that I undertake with real regret but I have come to the opinion that my involvement with the board is making the Rehab Group the subject of political controversy as this time. I spent 34 years in the Rehab Group and retired in December 2006.
I rejoined the board in 2011. The Rehab Group has played an enormously valuable role in Irish Society for nearly 70 years and I wish it continued success for the future.
“I have also informed the General Secretary of Fine Gael, Mr. Tom Curran, that I am stepping down as Director of Elections and as a Trustee of the party as of today. My involvement with Fine Gael related only to electoral strategy and organisation and I had no role in advising the government.
“Fine Gael has been mandated, along with the Labour Party, with the onerous task of turning the economy around after the deepest recession since 1929.
“I believe the government, and Fine Gael in particular, is performing well and the economy is on the mend. The party and the Taoiseach will continue to have my complete support and I will assist the party in any way I can as a private citizen and as a proud ordinary member of Fine Gael.”

Earlier: How Do You Lobby Yourself?