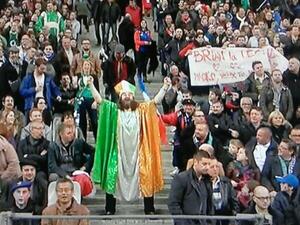 The Stade de France this evening.

“Ireland won the Six Nations by a matter of inches. With only 90 seconds to play in this extraordinary match, as thrilling as any in the recent history of the tournament, their players were sure that they had blown it.”

I believe in BOD, the centre almighty. Master of offload and turf. Of all that is green and ungreen.
We believe in one Lord, Paul O’Connell,
the only Son of BOD,
eternally begotten of the Centre, BOD from BOD, fight from fight,
true BOD from true BOD,
begotten, not made,
of one being with Rugby .
Through him all tries were made.
For us and for our salvation
he came down from Leinster:
by the power of the Holy sport he became incarnate from the Virgin Keith Woods,and was made man.

For our sake he was shafted under Warren Gatland;
he suffered de-selection and was buried.
In 2014 he rose again
in accordance with the Scriptures;
he ascended into Paris
and is seated at the right hand of Rugby.

He will come again in glory to play the living and the dead,
and his try scoring will have no end.