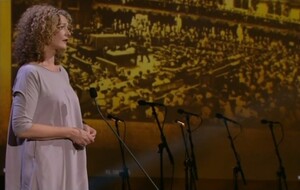 Journalist Justine McCarthy’s address to the Trailblazery ‘We Need To Talk About Ireland’ conference in the Round Room of The Mansion House, Dublin last weekend..

The first Irish people, Muintir Na hEireann, came here thousands of years ago from Africa. They were followed by The Celts, The Vikings and the English Planters. The inspiring Irish who send shivers down my spine are the farmers who tilled the Neolithic Ceide Fields in Mayo and the architects who built Newgrange ever before the Egyptians thought of building pyramids.

The momentum of 9,000 years a-growing ultimately exploded here in this haunting Round Room of Dublin’s Mansion House with the gathering of the first Dail Eireann.

On January 21st 1919, 29 revolutionary men and women met here and declared Ireland independent. They did it in 3 languages – Irish, English and French. The picture behind me is of that first Dail when they spoke these words…

“We solemnly declare foreign government in Ireland to be an invasion of our national right which we will never tolerate, and we demand the evacuation of our country by the English garrison”.

Today as we approach the centenary of the first Dail, it’s clear that somewhere along the way Ireland swapped one garrison for another, except this time the colonists came from amongst ourselves.

They were a political and business class who behaved as if they owned Ireland, carving it up between them for their own enrichment. They paid mere lip service to the Republic’s ideals of equality and fraternity. Where our forefathers had envisioned fairness, they fostered golden circles and feather-bedded cronyism.

Their rampage culminating in the surrender of Ireland’s economic sovereignty in November 2010.

As we staggered through the smoking ruins, the Catholic Church that had so dominated independent Ireland, was itself too crushed to help lead us through it. Revelations of how the Church had sheltered child-raping priests had rendered it, at best, morally neutered.

From the start, gombeen mé-feiners conspired with the Church to keep women in their place. The State’s founding fathers banished to Purdah the same women they had fought alongside for liberty. The total betrayal of our ancestors who gave their lives for our freedom bent us to near breaking point. But we did not break.

Our strength is each other, both on this island and everywhere else.

The Irish have long been wandering this earth. From our Atlantic-lashed little island, Irish missionaries, soldiers and humanitarian workers have travelled unimaginable journeys to spread goodness.

Their willingness to travel to the ends of the earth is a great legacy of our ancestors, so that today far away Australia has the highest per capita Irish descended population in the world.
And Bono can proclaim, with only a modicum of rock-star hyperbole, that the United States of America is actually an Irish colony.

It’s been a two-way street.

Once upon a time, a man called Mahatma Gandhi took inspiration from the peaceful protests of Michael Davitt’s Land League to win independence for his own India.

Nelson Mandela, who was conferred with the freedom of Dublin in this very Mansion House, took solace during his long imprisonment from the Dunnes Stores strike.

What goes around comes around, as they say. The world will not stop spinning on its axis and the Irish people will go on spinning with it, wherever we are on earth. From catastrophe… spring new beginnings. Perhaps now, at last… a terrible beauty really can be born.”

Yesterday: “ireland Is An Addict”

Here We Are Now