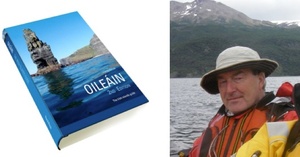 You may recall yesterday’s competition to win a copy of Oileáin, the guide to the islands of Ireland by David Walsh.

We asked You: What is Ireland’s least hospitable island”

“Some great answers and everyone missed the one I’d have given it for, namely The Bull off the end of Dursey Island in west Cork. Nobody has ever gone there and come back without a thousand yard stare for days afterwards.

Third I discounted big yokes or little yokes where the problem was climbing upwards or making progress once landed Dún Briste, Tormore, Skellig Little, as well as some of the category two ones as well. Last, some of the islands were actually easily landed, including the thing on the cover of the book [above], which is the Branan Mor, immediately below the viewing platform on the Cliffs of Moher. For some reason it is always or nearly always calm just at a certain spot, and it is often used for a lunchstop by kayakers going between Doolin and Lahinch, despite you could throw a stone at the surfers on Aileens from there.

Umfin, Oyster, Keeraghs, and even Duvillaun Mor (try harder guys, it’s handy enough at the northeast under the “house”) are actually easily landed.

The remaining candidates are Tuskar (Schweddy), Fastnet (Talismania) and Rockall (Skibum was first). Tuskar is in for much the same reason as Dursey Bull, you get one shot at the title only, because of the tides (out with the ebb and home with the flood), so experienced hands only need apply.

Fastnet has defeated so many kayakers of my acquaintance, simply because of what it is and where (shallow immediately off, deep everywhere else), and certainly my group couldn’t go ashore except one at a time, the other guy minding the boats 30 metres off, while everything for miles around was like a mirror.

And Rockall needs no explanation. It was nearly knocked off its perch by Hasslewood Rock, landed that I know of once and once only, and by an Irish guy at that, but it wasn’t treated in the book separately as an island.

It’s a pity someone has to be pipped at the post but sorry Skibum. The solicitor in me goes with the constutional bit. Rockall isn’t in Ireland’s undisputed jurisdiction. It suits the Irish government to disown it ! So I am going with Fastnet (Talismania) and Tuskar (Schweddy).”

Yesterday: Take Me To The Islands