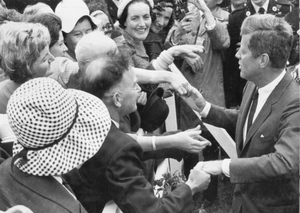 [John F Kennedy during his visit to Limerick in 1963]

A special meeting [of Limerick City Council] ground to a halt on Friday after solicitors acting for Cllr Pat Kennedy indicated that he would start legal proceedings if plans to rename abridge in honour of John F Kennedy were not upheld.
…
One of the public at the meeting Michael Punch, Patrickswell, thinks it is “ridiculous” to rename the Shannon Bridge after JFK.

“Why should we name it after an American president who did not really do anything for our city, when there are so many who have done things for Limerick” he asked.

But Michael Leech, O’Connell Avenue disagreed: “It might attract some of the Kennedy family to the city, and the entourage they would bring.”