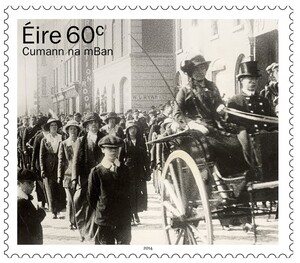 A new stamp to commemorate the centenary of the founding of Cumann na mBan (The Irishwomen’s Council) tomorrow, April 3.

“Designed by Ger Garland, the stamp features Cumann na mBan members driving at the head of the funeral of citizens shot during the Howth arms landing (courtesy of Kilmainham Gaol Museum). Cumann na mBan was a women’s nationalist organisation founded to ‘advance the cause of Irish liberty’. Its constitution provided for the use of force by arms against the Crown Forces in Ireland. Their patriotic aims attracted thousands of Irish women eager to play their part in the fight for Irish independence and by October 1914, Cumann na mBan had upwards of 60 branches…”

The History of Cumann na Mban (An Phoblacht)

In Praise of Irish Architecture