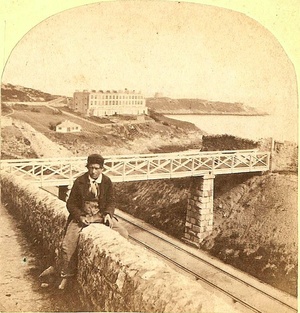 “We all know about the Great Dalkey Land-Grab of 2008. But did your readers know that the practice of squatting and gold-digging in Dalkey has been going on for over a century?
Back in the day the Commons of Dalkey was common grazing land which spread over Dalkey Hill nearly to Bray. When stone quarrying started on Dalkey Hill (“the Long Rock”) in 1817 the workers from the quarries built makeshift places of residence on the commons.
Largely unnoticed at first, the Dalkey miners came to public prominence in 1834 when the daughter of one of them, Miss Etty Scott (a fine-looking girl by all accounts) made claim that a horde of Viking gold was buried under the hill.
Miss Scott’s assertion resulted in the establishment of a Dalkey Goldmining Society and much digging, which ended ignominiously with the only thing discovered in the hill a bag of angry cats left there by prankster Trinity College medical students*
There was a happy ending for the Dalkey miners however; a case around the same time involving squatters on Ballymore Eustace held that they were entitled to ownership of the land occupied by them for the past twenty or so years, and they sold their plots (on which most of the big houses of Dalkey were subsequently built) to building speculators for substantial sums of money.
Sadly, the fair Etty (described by ballad singers of the day as ‘Dalkey’s beautiful dreamer’) failed to benefit from the sale of her father’s plot, having died of consumption, or possibly chagrin not long after the failure of her abortive gold mining enterprise…”

*the cats were covered in phosphorescent to make them glow in the dark.

A Hole In The Story