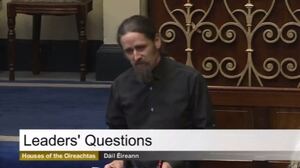 Luke ‘Ming’ Flanagan this afternoon in the Dáil raised complaints from a new Garda whistleblower, who is a serving member of the Gardaí.

During Leader’s Questions, the Independent TD said the garda had a “serious allegation of corruption within the National Drugs Squad”. Mr Flanagan said he went to the offices of the Garda Síochána Ombudsman Commission on Upper Abbey Street, Dublin 1, with former Garda John Wilson this morning to present GSOC with the allegation.

While they were in an Insomnia café, adjacent to the GSOC offices – the same café whose Bitbuzz wi-fi network was claimed to have caused one of the GSOC ‘bugging’ security issues – Mr Flanagan and Mr Wilson felt they were being followed.

During his response, Taoiseach Enda Kenny suggested maybe the gardaí thought someone was dealing drugs.

Deputy Luke ‘Ming’ Flanagan: “The Taoiseach’s Cabinet colleague, the Minister for Transport, Tourism and Sport, Deputy Varadkar, described the Garda whistleblowers as distinguished. Other than that, there has been no real encouragement from the Government for those who take such courageous actions. For anyone to step forward again, it would take an even greater act of bravery than before.
In the past week, I was approached under the Garda Síochána Act by a serving member of the Garda with a serious allegation of corruption within the National Drugs Squad. This morning, I brought the evidence I was presented with to GSOC [Garda Síochána Ombudsman Commission] in the company of former garda, John Wilson. However, the problem we have is that the garda who gave me the evidence is terrified that members of the Garda who are serving with GSOC could somehow leak this information and, as a result, evidence would be tampered with. The garda in question may have no need to be afraid but that is beside the point. The bigger issue is that it took so long, as serving members of the Garda, that so as long as serving members of the Gardaí are working within GSOC, how can such distinguished people trust it?
I understand that the Government is reviewing the operation of GSOC but it is all taking too long. In the meantime, however, those who wish to seek justice are left with nowhere to go, except for our offices that is. The Taoiseach did have the opportunity last year in the House to act but, instead, you rubbished Deputy Wallace’s policing Bill, dismissing it by stating there was no problem at all.
It was a worrying ordeal for the garda in question to go to GSOC, given his understandable concern about confidentiality. However, this worry was significantly increased this morning when it became obvious that we were under surveillance by an unmarked Garda car while waiting in the now infamous Insomnia café adjacent to GSOC’s premises. John Wilson, who was there with me for support, left the café momentarily to establish what was going on.”

An Ceann Comhairle: “A question please.”

Deputy Luke ‘Ming’ Flanagan: “He was subsequently followed down the street by the unmarked Garda car. So what was all of this about? It is bad enough that the independence of GSOC is questionable. But for the people about to report an incident to be put under surveillance by an unmarked squad car is, to say the least, astonishing. So, An Taosieach, as the leader of this country, what will you do about this, bearing in mind good people are being silenced and the legislation which you are standing by is anything but fit for purpose?”

Deputy Richard Boyd Barrett: “They are very easy to spot.”

The Taoiseach: “Maybe they thought there was somebody dealing.”

Deputy Mattie McGrath:”That is under the belt.”

Deputy Róisín Shortall: “The Taoiseach should withdraw that.”

Deputy Mattie McGrath: “It is outrageous. I know the Taoiseach is under pressure but he should withdraw that.

The Taoiseach:“We are awaiting reports from Mr. Guerin SC and Mr. Justice Cooke. The Oireachtas committee is looking at the terms of reference in respect of GSOC. These are matters of the greatest importance. Deputy Luke ‘Ming’ Flanagan, along with Deputies Daly and Wallace, presented me with several documents in respect of various allegations which I am following up at the Deputy’s request. Hopefully, we will have a proper and thorough response for him.
It seems that anybody who has had any connection with a garda over the past 30 years wants to bring forward reports and comments. We want to devise a system to be able to deal with these fairly and thoroughly in the interests of following through on allegations and, if they are true, dealing with them and, if not, addressing that aspect.
I cannot comment on the Deputy’s report to the House of being under surveillance and being followed or whatever. If he wants to give me whatever documentation he has, I will treat it with the utmost confidence, unless he says otherwise, and attempt to have a follow-through made for him.
With regard to the policing legislation introduced by Deputy Wallace last year, whenever the Guerin report is issued and whatever recommendations it makes will be followed through, as I have already said in the House. There are a whole range of issues with regard to justice and the different systems that are now being analysed and investigated. The House will have full sight of those for discussion and implementation of whatever recommendations come forward, including the Deputy.”

Deputy Luke ‘Ming’ Flanagan:  “The Taoiseach has just made the situation worse. The person who came to me was terrified about coming forward. He came to a Member of Dáil Éireann because he felt it was the only action he could take. I brought it into the Chamber today where many distinguished people have served down through the years but we have our Taoiseach stand up and make a joke out of it.”

Deputy Ray Butler: “He did not make a joke.”

Deputy Luke ‘Ming’ Flanagan: “This person was terrified to come forward for obvious reasons, given that, in the past, John Wilson, for example, who is sitting in the Visitors Gallery, had a rat hung on his door for doing the right thing. Today, I was hoping the Taoiseach might give a little bit of encouragement. The bigger issue is not the individual case but the fact that no one can have confidence in GSOC so long as serving members of the Garda Síochána are operating within it. That was the issue I wanted to raise today. However, the Taoiseach belittles and makes a joke out of being followed by an unmarked car with two obviously identifiable police officers. When he is going to do something about this?
The Taoiseach needs to deal with this quickly because people are losing faith in what they have to have faith in, namely the Garda Síochána. Whether it is my wife or my children, if something happens we have to go to the Garda and trust it. At the moment, that trust is not on the floor but below it. The Taoiseach needs to deal with this seriously. The one thing I was certain about today was that he would not answer my question because he has never answered a question since I came in here. Can he try and make it a first? Will he tell me and the people that he is going to do something about this issue? After that incident today, the man in question was not terrified anymore, he was quivering. He was on the verge of breaking down. I bring it up here but you make a joke out of it. You are a disgrace.”

An Ceann Comhairle:“This is Leaders’ Questions.”

The Taoiseach: “I made no joke about any comment the Deputy made.”

Deputy Ray Butler: “He did not.”

Deputy Finian McGrath: “He made a remark about dealing. He was out of order.”

Deputy Róisín Shortall: “It was outrageous.”

Deputy Micheál Martin: “The Taoiseach should withdraw the dealing remark.”

The Taoiseach: “The Deputy walks in here and gives a report to the people about being followed and being under surveillance. I know nothing about this. If he wants to tell more stories or make allegations, I do not have any information about them.
The whistleblowers’ legislation is being treated with proper respect and will be dealt with in a way that will constitute a radical change from what applied before. I note the comments of the interim Garda Commissioner about where there is room for dissenting voices in the force and the need to protect whistleblowers when they come forward. The Deputy will be aware that the Government has made a decision to have a statutory independent authority for the Garda. I myself chair the new committee in respect of justice reform and the committee dealing with the statutory independent authority. The latter committee had its first meeting this week. The process is now being set in train for public consultation with hearings by the appropriate committee. It will report back to the Dáil by July with recommendations for the setting up of this authority.”

“We Are Getting Into Such A Weird Area”