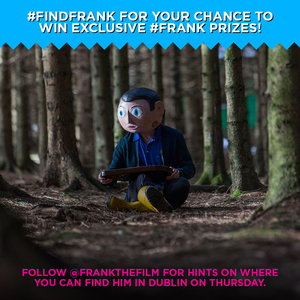 Where YOU could win one of five €100 cash prizes by finding Frank (above) in central Dublin.

Starting from 7:30am those who get their picture taken with Frank and tweet the image using the hashtag #FindFrank will be entered into a CASH draw.

Throughout the morning @Frankthefilm will be posting hints of where you may find Frank and winners will be announced at 1pm.

Meanwhile at Twitter Dublin tomorrow, ‘Frank’ director Lenny Abrahamson and star of ‘Frank’ Domhnall Gleeson will be taking your questions in a live twitter Q&A from 11:30 am.

‘Frank’ goes on general release on Friday May 9.

Thanks Maria and Gale