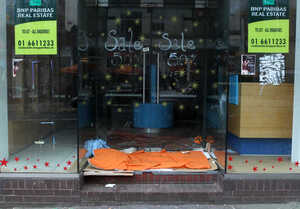 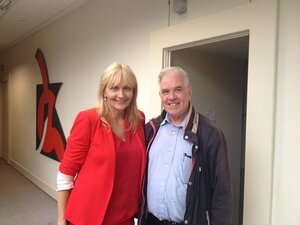 He warned of a situation in Dublin that has gone “beyond crisis”.

Miriam O’Callaghan: “I wanted to talk to you because the situation right now – in terms of homelessness, is at crisis-level, you feel – isn’t it?

Fr Peter McVerry: “In all the years I’ve been working with homeless people, it has never been so bad. We are even, I would say, beyond crisis at this stage. There are six new people ecoming homeless every day – and that’s the official figures, it may be more than that. The difficulty is that there is no exit out of homelessness any longer. The two traditional exits out of homelessness were, 1) in, to social housing, but there is a dearth of social housing. The building of social housing dropped dramatically during the Celtic Tiger years, and has never been recommenced. The other exit is, into the private rented sector, but certainly in the cities and particlarly in Dublin, again that’s out of reach now for homeless people, because the rents are escalating, they’re going through the roof. Demand for rented accommodation far outweighs the supply. Not only can’t homeless people get into rented accommodation, but people already in rented accommodation are losing it, because the landlords are coming along and saying, ‘The rent next month is going up by two or three hundred euros – if you’re on social welfare, that’s 50 euros a week, you can’t afford to pay that. Rent supplement isn’t going to increase to allow you to pay that. So, people in rented accommodation are losing their accommodation, and becoming homeless.”

O’Callaghan: “Do you ever therefore, despair, that it’s 40 years since you started out becoming a champion for the homeless – and 40 years on, you’re telling me that it’s worse than you’ve ever known it?”

McVerry: “Well, it’s frustrating, I don’t despair because you have to keep going, and often, the little you can do for the homeless people, means so much to them. But, it’s very, very frustrating. I now am in the situation – probably for the first time – lots and lots of homeless people are coming to me and saying, ‘Look, I’ve nowhere to sleep, I was left out to sleep on the streets for the past three nights ’cause there was no beds, can you do anything for me?’ And I’m saying, look, I’m sorry, I can’t do anything for you – there are no beds! And you know, a lot of these… the typical image we have of homeless people are drug users or alcoholics, or people with mental health problems.
The new homeless people are ordinary people like the rest of us. For example, we had two young people 19 and 21 who had left home because of their father’s violence – neither of them drank, neither of them used drugs, neither of them smoked – both had their Leaving Certificates. They went to get accommodation, they were told that there were no beds left, here’s a sleeping bag – and they were sleeping in a railway station. Now, we rescued them and managed to squeeze them somewhere into our accommodation.
But that’s the new profile of new homeless people, ordinary people who just have no accommodation available and can’t access accommodation because they don’t have the money to access. The other typical homeless group now, are families. Again, I had a phone-call, half ten at night, a couple of weeks ago, a mother was saying,’Look, I’m sitting here on a park bench with my three chidren, and I’m told there’s no accommodation available for me’.
It has never been like that before, in all the years that I have been working – it has never, never been so bad. And why we now have a crisis of homelessness, I believe, there’s a tsunami of homelessness coming down the road. There are expected, up to 35,000 home repossessions over the next few years. That means the banks are taking over the houses and 35,000 are going to be out on the street, looking for accommodatiion.
There are also 40,000 buy-to-let mortgages in arrears – the banks are going to repossess a number of those, or at least quite a percentage of those, and the tenants are going to be turfed out, because the banks don’t want to become landlords – they just want empty possession, so they can sell the houses and get some of their money back.
And the tragedy is there’s no exit out of it, there’s a dam at the end of the river and this torrent of water is coming down, and there’s no way out! It’s really… I think it’s quite frightening, and ultimately, I think, because of the changed nature of homelessness, these are ordinary people who would vote, and their friends would vote, I think this whole issue of housing and homelessness could bring this government down.”