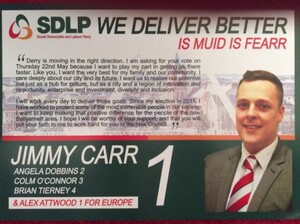 The other Jimmy Carr.

Local election candidate, Jimmy Carr, claims the SDLP accused him of being a drug dealer.

Earlier this week The Derry Journal exclusively revealed that a Derry City Council (DCC) issued iPad containing “questionable” messages linked to Mr Carr had been handed over to the PSNI.

It is alleged that the messages were about illegal drugs.

However, The Derry Journal can now reveal that the PSNI have received a second iPad and are considering examining both devices to determine if any crime has been committed.

Councillor Carr says he will fight the election as an Independent.

The Town They Love So Well