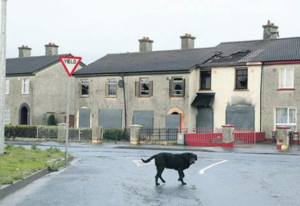 A Paris-based international human rights body [International Federation for Human Rights] lodged claims on behalf of 130,000 residents in estates in inner city Dublin and Limerick over sewage problems, persistent leaks, harmful damp and mould after charities at home did not take up the cause

The complaint also focuses on crime and anti-social behaviour and accuses the State of a strategy of deliberate neglect to further run down already dilapidated flat complexes which sit on prime development land.

The report also targeted the €3bn Limerick Regeneration scheme for failing to complete promised work in estates such as Moyross, Southill, St Mary’s Park, and Ballinacurra Weston. It states only €116m has been spent.

The FIDH complaint accuses local authorities of a conflict of interest as councils act as landlords and also enforce regulations.

Have You Seen José?

Everything To See Here

21 thoughts on “Estate Of The Nation”